Through the mercy of our Lord Jesus Christ and efforts of Father Marcel Oprisan at the end of year 2008 the first Romanian Orthodox Church opened its doors to the Orthodox community in Aberdeen and surroundings. The Romanian Orthodox community, while weak in number and busy with family life or jobs, always found time for the church, and organised a room given by St. John's Episcopial Church. We thank God and those through whom He worked, we pray their generosity is paid back.

After more than a year since first Holy Liturgy, His Eminence Iosif, Archbishop and Metropolitan of the Metropolis of Western and Southern Europe blessed the community with his presence. It was the first visit of a Romanian Orthodox bishop in the North of Scotland and the first Holy Liturgy in the presence of a Romanian bishop. His Holiness officially inaugurated the parish and announced its patron as Saints Joachim and Anna. Father Gabriel Hlade was then introduced as the parish priest. 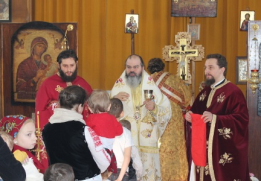 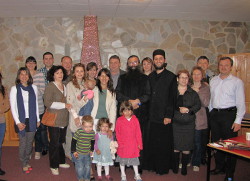 After more than 4 years of priesthood in Aberdeen in summer 2014 Father Gabriel returned with family in Romania being replaced as parish priest by Father Andrei Dosoftei. The official introduction of Fr Andrei took place on the 16 November 2014. 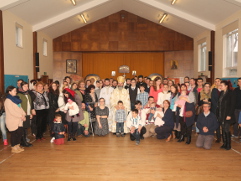 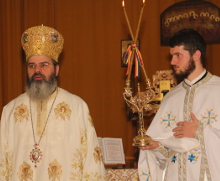